As LACA president Anne Page is involved with all matters relating to protecting endangered and vulnerable wildlife particularly in the PDA ie Priority Development Area of Greater Flagstone, she has alerted EPBC referral officers to an approval given to MIRVAC to clear vegetation by Queensland Department of Infrastructure Local Government and Planning (DILGP) on the 7th February 2017 - approved the operational works and removal of vegetation for a caretaker’s dwelling and for bushfire reduction on a MIRVAC property at 96 – 102 Brightwell Street, Greenbank DEV 814.

WHY is LACA Logan and Albert Conservation Association concerned?

This property lies within the area mapped by MIRVAC as AREA 3 (EPBC 7817 & DEV 768) which is now under a controlled action (Federal Government Decision Notice dated 15 December 2016).

The proposed caretaker’s residence is located within the northern extent of the MIRVAC site. The application area adjoins Brightwell Street to the west, an existing rural residential property to the north (88 Brightwell St), vegetation to the east and a power line easement to the south. The proposal involves clearing of vegetation to establish a 0.22ha building envelope for the caretaker’s dwelling (Primary Clearing Area) and an additional 20m fuel reduction zone for bushfire management. Access is intended to be provided by 6m egress paths. Figures 1 & 2 are from the Environmental Management Report by Saunders Havill Group. Figure 2 below. 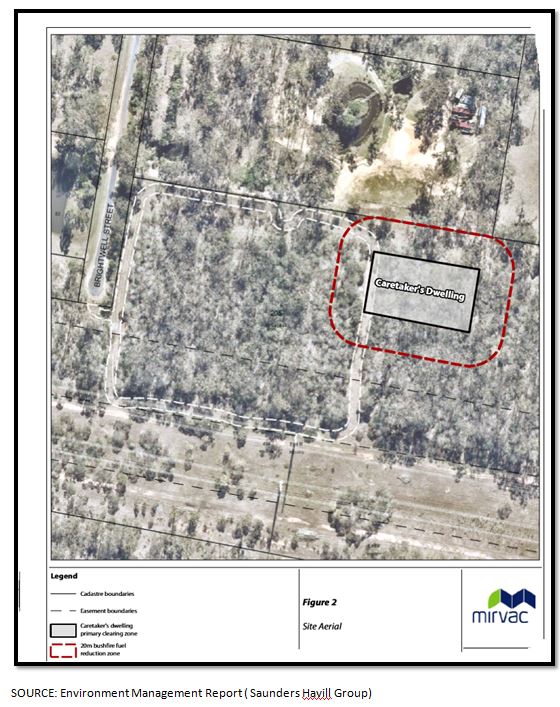 REASONS FOR OBJECTION TO DILGP APPROVAL  are listed below.

Why is the vegetation at 96-102 Brightwell St not being protected? It adjoins and connects to surrounding known habitat being used by the above species.

3. Past community sightings and dead specimens of spotted tail quolls ( a threatened species in Queensland, endangered under EPBC Act) have been located close to the northern section of the MIRVAC property and close to the Powerlink easement which is close to the caretaker’s dwelling. Sightings have occurred to the east, south-east, west, north-west and south-west of this location at Brightwell St and the MIRVAC property.

Why is the Queensland Government not protecting habitat for threatened species in SE Queensland, especially in the Greater Flagstone Area?

5. Likely presence of spotted tail quolls in the Greenbank/North Maclean / Munruben area was acknowledged in EPBC 6941 - STATEMENT OF REASONS.

“The delegate considered that there is likely to be a low density population of the spot- tailed quoll in the region, and that an area 1-5 km to the north of the ( WEARCO)site (EPBC 6941)  is likely to be an important east-west habitat corridor.”

6. The vegetation at 96-102 Brightwell St and surrounding this property is mapped as SEQ Koala Habitat Values - Medium Value Bushland and Medium Value Rehabilitation. Offsets will not prevent the local extinction of koalas in the Greenbank Area or in SE Queensland. The removal of any habitat is a KNOWN threat to the survival of koalas. Reducing habitat connectivity in the local landscape will not ensure the survival of koalas in this location of Brightwell St or Greenbank.

Why is the vegetation not being protected for koalas which are known and sighted in the local area?

Why is the Queensland Government not protecting koalas in SE Queensland, especially in the Greater Flagstone Area?