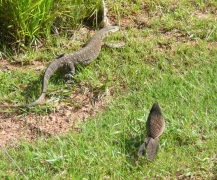 My animal of the month is (I think) a bird - the Pheasant Coucal. This noisy, clumsy, brash bird has whooped, clicked and hissed around our house for the past six months.

Nothing about this bird makes much survival sense. It spends a lot of its time waddling around on the ground like a lizard (a link, perhaps?), flies clumsily, and crashes into bushes or anything nearby when it wants to (or has to) land. But it must be admired for its alluring black breeding plumage, the intensity of its mating efforts, and the dedication it shows in securing food of all sorts for its young in the nest somewhere deep in grass tussocks on the adjacent Cornubia Wetland Reserve.

My admiration grew even greater as I watched it one day marching a large goanna away from its nest and off its patch. The goanna was clearly in for a feed of easily reached fresh eggs, but was completely intimidated by the strutting, clicking, bristling pheasant coucal and just did as it was told and went.

One day about a month ago, the pheasant emerged out of the long grass, on the ground like a lizard, with a miniature version of itself waddling behind (stumbling actually). And off they went - another year, another chick. 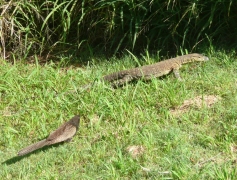 Read 1856 times Last modified on Wednesday, 24 July 2019 04:43
More in this category: « Wildlife in Scenic Rim Flying Fox Infirmary and ICU at Canungra »
back to top