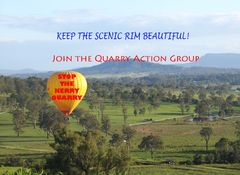 Scenic Rim Regional Council has been surpised by the huge number of objections against the proposed Kerry and Christmas Creek Quarry. Council has now received  over 800 submissions. The ERA application is for a quarry to operate in the quiet rural area on Erin View and Glandore Roads. The notification period finished on 29 July, 2011.

Concerned residents have had public meetings and arranged for volunteers to collected submissions from all over the region. Objections have been received from tourists visiting the region who are concerned that a quarry would reduce the tourism, impact the environment while causing chaos on the already choked road system.

The Quarry Action Group (QAG) believes that approval of a quarry in this area will cost jobs in the legitimate rural areas of farming, cropping, grazing and tourism. They suggest that there is little or no economic benefit in approving this type of industrial development in this rural zone. The group suggests that the impacts on the rural roads is more than the ratepayers of the region could afford to maintain. They go on to point out that there are alternative sites in the State Development Area (SDA) that would be much more suitable and would be supported by infrastructure such as good quality roads and reticulated water. They also point out that environmental and health impacts - including vegetation clearing, dust, noise, operational times (24/7) air quality, water quality, pollution, safety of school children, etc-  have not yet been fully studied or suggested mitigation included under the application.

Concerned residents are asked to continue to contact their local Councillors as well as State and Federal members to voice concerns over the quarry. Submissions may have closed but we all have a right to have our politically elected representatives hear our concerns.

The Quarry Action Group (QAG) will be actively involved to help residents and tourism visitors communicate their concerns that their values and appreciation for the amenity offered by the natural environment will be destroyed by the proposed industrialized quarrying activities of Kerry Quarry. QAG will continue to lobby at all levels to protect the natural assets of the area.  A Tourism Taskforce has recently been established for Scenic Rim.

What impact wil the blasting have on the horse races? With $7 million to revamp the racetrack from federal money the sport / business of racing will undoubtedly be impacted by 24/7 operations.

What is a Key Resource Area? KRA

Queensland Government introduced a new Policy ( 2007) which seeks to maintain the long-term availability of major extractive resources by protecting these resources and their main transport routes from incompatible land uses. Incompatible development within areas identified as key resource areas will be excluded as of September 2007, providing increased protection and secured viability of the extractive industry in some parts of Queensland. The new State Planning Policy (SPP) and Supporting Guideline, which was adopted under the Integrated Planning Act 1999 (Qld) took effect from September 2007. It will have positive ramifications for developers, miners and associated entities who seek approval for extractive activities within a key resource area.