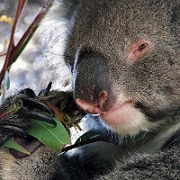 Modern koalas - the sole living member of the diprotodontian marsupial family Phascolarctidae - are among the largest of all arboreal leaf-eaters. To attain this remarkable condition on a diet of eucalyptus leaves, a notoriously poor and somewhat toxic food source, the tree-dwelling marsupials developed unique anatomical and physiological adaptations including specialized chewing and digestive anatomies and a highly sedentary lifestyle. The dramatic differences between the skulls of extinct and modern koalas, especially in the facial region, are probably related to the change to a tougher diet of eucalyptus leaves.

This research has recently been reported at www.physorg.com  - from the new findings published as the featured cover article in the current issue of  The Journal of Vertebrate Paleontology.

Skull fragments of prehistoric koalas from the Riversleigh rainforests of millions of year ago suggest they shared the modern koala's "lazy" lifestyle and ability to produce loud "bellowing" calls to attract mates and provide warnings about predators but did not share the uniquely specialized eucalyptus leaf diet of the modern koala (Phascolarctos cinereus).

Researchers from the University of New South Wales and the CSIRO have drawn these conclusions after making dozens of detailed anatomical comparisons between the brush-tailed possum, the modern koala and the two fossil species (Litokoala kutjamarpensis and Nimiokoala greystanesi).

The fossil species were unearthed from the Riversleigh World Heritage site in Queensland, Australia. The comparisons reveal similarities in the back of the skull between the modern and fossil koalas, but substantial differences in their teeth, palate and jaws.

Koalas are most closely related among living marsupials to wombats but the two species diverged some 30-40 million years ago. Among fossil koalas there are 18 named species representing five genera spanning the period from the late Oligocene (37 million years ago) to the present.

However, they are generally scarce in the fossil record and most species are only known from a few isolated teeth or jaw fragments. Therefore, it has been difficult to develop an accurate picture of their behaviour, diet and evolution.

The researchers believe that the prehistoric koalas also shared with their modern cousins the ability to produce loud "bellows" based on similar large bony prominences - the auditory bullae - that enclose structures in the middle and inner ear. However the auditory bullae of the extinct Nimiokoala and Litokoala species are not as exaggerated as in the modern koala, according to team member UNSW Professor Mike Archer.

"Modern koalas are extremely sedentary and vocal animals," says Archer, who is perhaps best known for leading research into the extraordinary Riversleigh fossil deposits in Queensland, which led to the site being listed on the World Heritage Register.

"They produce low frequency vocalisations that pass through vegetation and can be heard up to 800 metres away - far exceeding the home range limits of male koalas. The fossil koalas share similar large bony ear structures to the modern koala and would have been well adapted to detecting vocalisations in the rainforest environment of Riversleigh in the Miocene era."

"In order to accommodate both the mechanical demands of their new diet, as well as maintaining their auditory sophistication, the koala underwent substantial changes to its cranial anatomy, in particular that of the facial skeleton," says Dr Julien Louys of UNSW's School of Biological, Earth and Environmental Sciences. "The unique cranial configuration of the modern koala is therefore the result of accommodating their masticatory adaptations without compromising their auditory system."

Click here to see article in physorg.com . There are further links there to more research about koalas - among other subjects.

More in this category: « Koala video Carbon and koalas collide at COP15 »
back to top