Crisis rhetoric has to be matched with crisis action 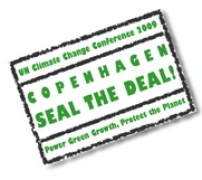 Senator Christine Milne, Deputy Leader of the Australian Greens, immediate past Vice-President of the IUCN and a UNEP Global 500 Laureate writes in the CLIMATE THINKERS BLOG. What a contrast with the global financial crisis where the crisis rhetoric from world leaders was matched by effective, immediate and cooperative crisis action.

Unless and until the crisis rhetoric of climate change is matched with crisis action, it is doubtful that a meaningful agreement can be reached at next month's conference.

Around the world, governments are explicitly linking the extreme weather events we've seen - heat waves, bushfires, drought and floods - to climate change and using that link to push for the limited action they are willing to take. Attacking climate sceptics for holding back action has also become a favoured mechanism for claiming the moral high ground in the climate debate. This claim to be guided by the science while espousing weak and scientifically unsupportable targets, this climate hypocrisy, is more dangerous than true climate scepticism because it is more insidious.

It is deeply troubling that the communiqués from recent G8 and G20 meetings fall into exactly this category of spin over substance. These statements have adopted the climate science as their raison d'etre, but jettisoned that science in coming to their conclusions. At L'Aquila, for example, the leaders of the world's largest economies committed to keeping warming to less than 2C above pre-industrial levels by aiming to stabilise carbon concentrations at 450 ppm, which was to be achieved by halving global emissions by 2050. This is scientifically flawed at each of its three levels.

Firstly, many scientists, together with many developing country leaders, now warn that 2C warming will not be safe and we should do everything we can to limit warming to far less than that. Secondly, the average of all scenarios modelled in the IPCC process gave us the scientific conclusion that at 450 ppm we have only a 50% chance of constraining warming to 2C. Since we are trending at the upper end of IPCC scenarios, we can conclude that a 450 ppm trajectory gives us a less than 50% likelihood of staying below the 2C threshold. Thirdly, 21st century carbon budgets developed by leading scientists show that halving global emissions by 2050 has no chance of putting the planet onto a 450 ppm trajectory.

It would be a tragedy if the Copenhagen Conference made the same mistake. If world leaders are serious about taking the advice of climate scientists, they must lift their ambition to the 350 ppm stabilisation that science says is necessary for a safe climate outcome, and lift the ambition of their emissions reduction targets concomitantly. For developed nations this will mean cuts in the order of 40% below 1990 levels by 2020, heading towards zero emissions well before mid-century.

The thing about science is that you cannot pick and choose the bits which are and are not convenient. You cannot negotiate with the laws of physics and chemistry. President Kennedy, when aiming for the moon in 1961, could not simply dismiss the effects of gravity to make the job easier. Nor could he aim to put a man on the moon and leave his return to a later date when it was more politically expedient. Kennedy's scientists and technologists had to work as hard and fast as possible to succeed in doing what was necessary to meet the challenge, and to use the laws of nature to help rather than hinder their task.

One of the many problems we face in driving political ambition is that some scientists who privately warn that we must make very deep cuts very fast, in public allow themselves to become what they call "pragmatic". They temper their advice because they fear that honest advice will be seen as politically impossible and will thus be ignored or ridiculed. I say to those scientists, have courage. If you do not, there is no chance at all that the necessary targets will be adopted. You will become part of the problem not part of the solution.

As a global community we need to take heart from the response to the global financial crisis. If there is the political will, anything is possible. The world turned on a sixpence, dramatically and rapidly changing policy and finding trillions of dollars in a matter of weeks.

It is not knowledge we lack, nor technology nor the capacity to address global warming. It is the political will. If we fall into the trap of pragmatically assuming we cannot build the necessary political will, we are doomed.

If we - the scientists, the politicians and the community - demand the same level of crisis action in response to the climate crisis that was taken in response to the financial crisis, we will solve it. We will gladly sign up to multi-billion dollar financing commitments, we will reach a fair and strong agreement to protect biodiversity and forest carbon stores, we will embrace the challenge of deep and steep cuts in emissions and move swiftly to the zero carbon economy of the future.

Read comments and other thoughts here.

Read 2451 times Last modified on Wednesday, 24 July 2019 04:43
More in this category: « Devastating floods in Queensland Is the Great Barrier Reef on Death Row? »
back to top