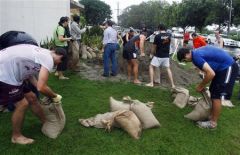 The images of the devastating floods in Queensland and other areas of Queensland and  Australia have shocked the world. Three quarters of the state of Queensland, an area the size of France and Germany, is under water and some 31 towns including our capital city Brisbane, Ipswich, Toowoomba, Dalby and others in South East Queensland  have been inundated.
Tens of thousands of people have lost their homes, their businesses and lives have been lost. Surviving victims have described the floods at Toowoomba as "an inland Tsunami", "a devastating wall of water" and "an angry force of nature".

Donations are being accepted to help the many human victims through the Queensland Premier's Department. Go to: http://www.qld.gov.au/floods/donate.html  for more information.
Damages from the floods are impacting every aspect of life in the area including access to clean water and food and shelter, food production and, ironically, coal mining – Queensland's largest primary industry.

See more images and news here.
South Australian Premier Mike Rand said, "It should not take a once in 1000 year drought or a flood half as big as Europe to convince us that our climate is changing".
The science is not especially complicated: warm air holds more water vapor than cold. Because we've heated up the planet, the atmosphere is now 4 or 5 percent wetter than it was 40 years ago. That means there's more water waiting to drop when conditions allow. It doesn't 'cause the rain,' it makes the record-setting floods we're seeing around the planet more likely to happen.

Scientists such as Professor Matthew England of the University of New South Wales Climate Change Research Center say that climate change has intensified the monsoon rains that have triggered these record floods. See the world news coverage here.

"The waters off Australia are the warmest ever measured and those waters provide moisture to the atmosphere for the Queensland and northern Australia monsoon," Professor England told Reuters news.

Prominent US climate scientist Kevin Trenberth, head of the Climate Analysis Section at the National Center for Atmospheric Research in Boulder, Colorado, agrees saying "The extra water vapor fuels the monsoon and thus alters the winds and the monsoon itself and so this likely increases the rainfall further. ...It is easy to argue that 1 degree Celsius sea surface temperature anomalies gives 10 to 15 percent increase in rainfall."

A great deal can be done to help, whether you're in the region or far away.

Donations are being accepted to help the many human victims through the Queensland Premier's Department. Go to: http://www.qld.gov.au/floods/donate.html for more information.

Read 2575 times Last modified on Wednesday, 24 July 2019 04:44
More in this category: Crisis rhetoric has to be matched with crisis action »
back to top