The future we want

Globally the United Nations is preparing for RIO+20.  20 years after the 1992 United Nations Conference on Environment and Development - people from all over the world will gather and discuss how to best manage our common future in a sustainable and lasting way. There is opportunity for all to either write your own message, or agree on any of the already published messages. To look at the messages go to this link.

There are two main themes Green economy in the context of sustainable development and poverty eradication and the institutional framework needed.

Australia is a member state and you can see what our country has done here.

At a South East Queensland non government organization level LACA has participated at a FOSEQ (Friends of South East Queensland) workshop to present our concerns that will be taken to RIO. Several members of Australia's UN bodies also attended.  There is a Queensland / Brisbane branch of the United Nations if you want more information or wish to become involved. FOSEQ is based on the principles of the UN Earth Charter.

Although an international conference might seem remote from us in SEQ Logan and Scenic Rim your thoughts and vision are wanted and internet makes that conversation quite easy. See what others have contributed already here and submit your own. Of course LACA would be delighted for you to tell us so that we can make a link on our website.

Sustainablity is the key term - what does it mean? It was first defined in 1992. Sustainability calls for a decent standard of living for everyone today without compromising the needs of future generations - a challenging goal. This writer agrees with the wise words of David Suzuki "We have failed to address the fundamental truth that endless growth is imposible in a finite world".  In addition our human population is the elephant in the room.

A future worth choosing must be based on true costs to people and the environmentstate the UN's "Resilient People, Resilient Planet: A Future Worth Choosing" report

The Western Corridor: Leading the Way in Planning for Population Growth?

Satellite cities and master planned communities can't be just residential developments with a few shops. They need to have fully functioning CBDs, and governments need to commit to providing schools and health facilities years before these cities reach full capacity. They also need to be fully self-sufficient and bring together the very best in business, information and communication technology, education, health, retail and entertainment as well as residential.

Greater Springfield is well on its way to becoming a city of the future which is focused on the integrated master planning principle of living, working, playing and learning in one healthy, sustainable community. Master planned communities need robust public transport, roads, health and education facilities, sewerage, stormwater management and open space systems. But they will also be characterised by the quality, accessibility, reliability and security of their technology platform.

Read the article online in the August edition of the Brisbane Institute.

Raynuha Sinnathamby Deputy Managing Director of Springfield Land Corporation authored this article. Whatever happens there must be alternatives to more roads and more cars. In the areas proposed for development there is currently no public transport and state government has not really been listening. Rail in 2026 is not helpful for current residents and any who come early to the proproposed satellite cities. 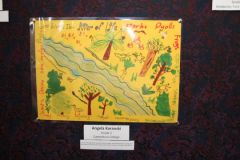 Seven year old Angela Koranski is in Mrs Olsen's year 2 class at Canterbury College. Angela recently entered the Logan City Council's World Environment Day Poster competition. Angela was selected as one of thirteen winners. Her winning entry will be displayed at the Logan Art Gallery and her poster will be reproduced as part of a Logan City Council calendar.

Angie's entry was titled "River of Life" and related to conservation of the
Logan River. In her entry she wrote ...

"I live on the Logan River. So do lots of birds, reptiles, mammals and plants. Cutting down trees means the animals won't have a home. Nature is special. We need to look after it!"

Can we feed a “Big Australia” ?

The discussion of food security for the future is one which we should all consider.

Michael Lardelli is Senior Lecturer in Genetics at The University of Adelaide. Since 2004 he has been an activist for spreading awareness on the impact of energy decline resulting from oil depletion. He has written numerous articles on the topic published in The Adelaide Review and elsewhere, has delivered ABC Radio National Perspectives, spoken at events organised by the South Australian Department of Trade and Economic Development and edits the (subscription only) Beyond Oil SA email newsletter. He has lectured on "peak oil" to students in the Australian School of Petroleum.

The concluding paragraphs of the well researched article state

By 2050, if Australia is to survive as a nation, our agriculture will need to have adapted to climate change, instituted radical measures to recapture and recycle nutrients (e.g. using human and animal wastes as fertiliser) and have, somehow, compensated for the loss of cheap and plentiful fuel. We have not even begun to move in the direction of the more local, intensive but lower energy agriculture that will be necessary and we have less than four decades to accomplish it! In the face of these challenges it is highly unlikely that we will be able to support 36 million people. Indeed, even supporting our current population might prove a significant challenge.

In light of everything described above, we would be very well advised to restrict our population growth as much as possible, as soon as possible. Our ageing demographic profile - the "baby-boomer bulge" - represents an opportunity to do this in an organised and humane manner. We should not be desperately importing new mouths to feed in a vain attempt to either build more houses or support the baby boomer generation through their retirement. For the sake of our children's future we should, instead, do what is necessary to cope with the passing of the ageing bulge using our own people. This will be difficult, but an informed Australia can accept and meet this challenge. Moreover, our children will be left with a far more robust and food-secure nation. The alternative, "Big Australia" is not really an alternative at all.
Published in Population
Tagged under
Read more...
Wednesday, 24 February 2010 10:13

Our first South East Queensland Koala Alliance video is ‘in the can’ and can be viewed at this link here.

A group of concerned citizens from Logan have been engaged and actively campaigning to protect the Logan River from the first unsustainable proposal by ENERGEX to supply power for goverment's stated future population growth. The group VETO have a website www.veto.org.au which is currently being updated. There have been many sightings of koalas along the proposed power corridors. It would seem the big squeeze is being exerted on all species of the natural environment  - animals and plants,microbes and man - to move over for the built environment with its manufactured  concrete and steel structures.