TO: THE HONOURABLE GREG HUNT, MP, FEDERAL MINISTER FOR THE ENVIRONMENT

SAY NO TO INDUSTRY AT NORTH MACLEAN

Why is this important?

There are significant environmental and community concerns

Since 1996, the environmental concerns raised by the community at North Maclean and Munruben have never been addressed. There have been numerous sightings of vulnerable Koalas on and around the property. There have been numerous sightings of endangered Spotted-Tailed Quolls in adjacent properties - these quoll sightings have been the first in the Greater Brisbane Area since the 1930s . Quoll roadkill has been collected from the area confirming the presence of quolls in this area. The proposed site provides valuable habitat for koalas, quolls and other threatened species including the endangered grey headed flying fox, the Swift Parrot and the vunerable Glossy Black Cockatoo.
There have been no detailed impact assessments of industry on these vulnerable/threatened species. No frog or reptile studies have ever been carried out.
By signing the petition, you are asking Minister Greg Hunt to REJECT the North Maclean Enterprise (Industry) Precinct proposal. You will be giving our unique Koalas, Spotted-tailed Quolls and other Endangered/Vulnerable wildlife of North Maclean and Munruben a chance of survival. If this development application is approved at North Maclean, 117 hectares (approx. 289 acres) of koala food and shelter habitat will be totally cleared. The major threat to koalas is the loss of habitat. This vast proposed site is only 45% of what is eventually planned for the koala habitat of North Maclean. This current application is a dangerous precedent in the area that should not be approved.

COMMUNITY CONCERNS - tick your concerns on the attached Word document and return to address provided. 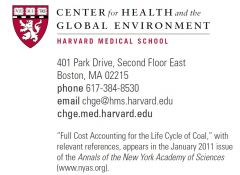 Dr. Paul Epstein from the Center for Health and the Global Environment at Harvard’s Medical School has written an article quantifying the true costs of coal in terms of economic, health and environmental impacts. Dr. Epstein’s study details how each stage of coal’s life cycle (extraction, transportation, processing, and combustion) has enormous costs, all of which are directly borne by the public. Notably, the report estimates some $74.6 billion a year in public health costs for Appalachian communities, mainly from increasing healthcare burdens, injury and death.

Beyond the direct health damage coal extraction and burning has on communities, the American public is paying $187.5 billion due to air pollutants, $29.3 billion for mercury poisoning, and anywhere between $61.7 and $205.8 billion for global warming emissions. Although this is an American study we in Australia - and South East Queensland will be bearing similar impacts. Read more about this story or an executive summary here.http://wvgazette.com/static/coal%20tattoo/HarvardCoalReportSummary.pdf

This is timely research as our Queensland Government approves more mining exploration amidst the World Heritage listed Mt Barney. All over South East Queensland mining companies are wanting to extend the exploitation of our areas most valued for the richness of biodiversity. During the 2011 INTERNATIONAL YEAR OF FORESTS for people which seeks to have members of the human species become more aware of our connections with healthy forest systems. Healthy forests equals a healthy life sustaining enviroment for healthy people.

Beyond dollar evaluations, qualitative impacts include harm to air quality,watersheds, land, plants, animals, families and communities. The proposed technology of CCS is costly and risky, and is projected to magnify the ecological and health footprint of coal. The extent of environmental harm is such that instead of more coal mines we should be phasing fossil fuel production out and bringing in renewable non degrading processes - especially where we can apply closed loop cycles - as does nature.