People power is our greatest asset in SEQ 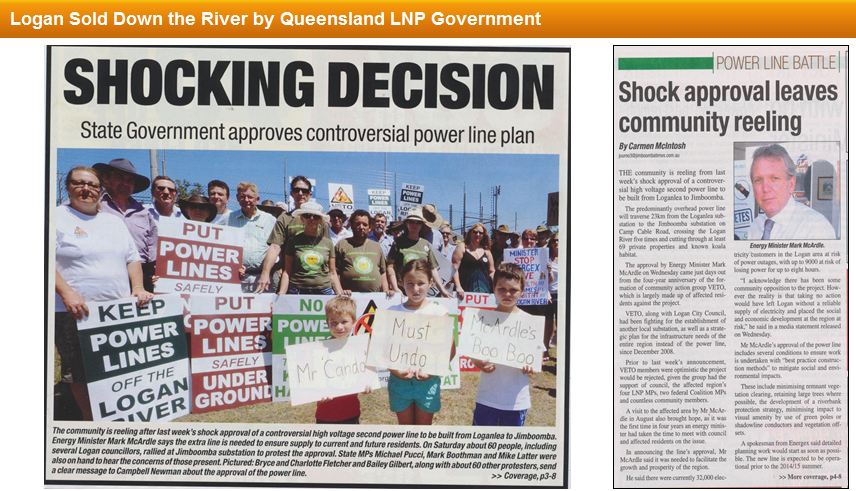 Despite the number of horrendous unsustainable development or infrastructure processses being proposed in Logan, Gold Coast, Scenic Rim and Ipswich, community strength and energy to defend the natural assets of the region remain strong and continue to strengthen. SEQ has significant biodiversity values that are appreciated by longterm residents in the region and we are determined to protect them despite the unreasonable economic pressures and expectations that big business, state government and corporations want to impose.

Pre-election promises of the Campbell Newman led LNP government have been broken and the local members must also feel our disappointment. A platform based on the four pillars of economy, construction, tourism and agriculture leaves both natural and built  environment out of the equation.

Disinformation is also challenging to deal with - especially when government changes the rules to suit its 'development at any cost' agenda - cost being only dollars for construction. Follow detailed history at VETO's website for analysis of issues an alternatives. Queensland Minister McArdle's approval of the second Loganlea to Jimboomba 110kV powerline allows Energex to continue to "Gold Plate" their network with more "poles & wires" when other alternatives are available.

Powers of ULDA Urban Land Development Authority are to be replaced by MEDQ - a corporation solely designated to facilitate economic development. There will be a new Minister for Economic Development Queensland. Former UDAs will be called PDAs Priority Development Areas and few local councils have had control returned - certainly not Logan with Yarrabilba and Greater Flagstone.

Teviot Downs at Greenbank is another development considered as a future stage of Greater Flagstone. The developer currently is waiting  for a decision for the second relodged application - first withdrawn. Teviot Downs submitted DEV2012/284 on  15 May 2012; for 1017 residential lots, 1 community lot, 1 utility installation lot, 8 balance lots, a new road & a park. Notice of application commenced on 26th July 2012, this provided the community 20 business days to lodge submissions. The submission period ceased 3rd Sept 2012; this provided the 15th Oct 2012 being the 40 business days for determination of the application by the ULDA.

Save Greenbank suggests residents contact their local member and other government minsters, to remind them of their pre election promises/statements to this community. That the community be consulted and involved in appropriate development, and for existing communities (as per 4BC interview Campbell Newman & Mike Kelly-SG 26th Mar 2012). Save Greenbank believes that the decision has been delayed to date, to allow the current application to be determined utilising the new legislation which commenced 12th Dec 2012.

One of LACA's major concerns is that there have been no significant flora and fauna studies done for these areas and the inevitable loss of habitat will impact negatively on wildlife currently living there. Business as usual development is not a creative solution. LACA works with and supports all community groups in region to obtain better environmental outcomes.

More in this category: « WWD 2013: Wetlands and Water Management Santa tests his landing space @ Berrinba Sanctuary »
back to top